Representatives of the centres of ETSN, the European Talent Support Network, met for the third time on 8-9 February 2018 in Budapest. The first occasion was the September 2015 Brussels inaugural meeting of representatives of the 14 Talent Centres founding the Network, outlining the main development guidelines and the first common tasks. Many of the activities/plans concerned have been implemented in the meantime; members of the Network applied for developing EGIFT online training materials (MOOC) with success (http://www.talentcentrebudapest.eu/content/egift-transnational-meeting-budapest). Following three calls for prospective European Talent Points, the Network has become more and more widespread: by January 2018, around 350 Talent Points of 42 countries had registered to the Network, and the number of European Talent Centres rose from 14 to 23, including 20 European and 3 non-European ones (located in the United Arab Emirates, in India and in Peru, respectively), over the 2.5 years since the first meeting.

The second meeting of representatives of 16 of the 19 ETSN centres took place in October 2016. The so-called Network Council (https://etsn.eu/council-members/), in charge of Network strategy for two years, became operational there.

The recent, third, official meeting has been attended by a particularly high number of representatives, 35 persons from 19 countries, that is, many have brought colleagues to involve as many as possible from each Centre in the common tasks of the European Talent Centre Network, to familiarise them with the Network and let them contribute to its development. All but one member countries were represented, and it was a special pleasure that the three non-European so-called “Associated Talent Centres” have also sent their delegates.

It is almost a tradition that such meetings first of all summarise the activities of the ECHA Qualification Committee, then give an opportunity for new Talent Centre members to introduce themselves. The first presentation was held by Dr. Lianne Hoogeveen, head of the ECHA Qualification Committee, on the outcome of the tender in 2017. After that, together with Prof. Péter Csermely, President of ECHA and Prof. Albert Ziegler, President of ETSN, she handed over the certificate symbolising ETSN membership to the new European Talent Centres. 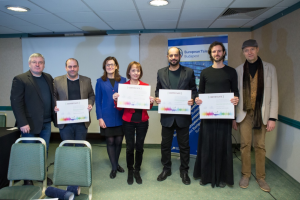 As for the introductions, first the new Leuven Talent Center for Flanders was presented by Dr. Stijn Smeets, then Dr. Khalifa Al Suwaidi from the Arab Emirate spoke of Dubai-based Hamdan Bin Rashid Al Maktoum Centre for Giftedness and Creativity, and Helena Fonseca filled in the audience on the activities of the National Association for the Study and Intervention in Giftedness in Portugal. Finally, Dr. Yolanda Benito, head of the Spanish Huerta del Rey Talent Centre described their work.

The most important events of the past 16 months at ETSN were summarised by Prof. Albert Ziegler. Significant achievements in the past 1.5 year included the finalisation of the ETSN website https://etsn.eu/, the release of the first newsletter, https://etsn.eu/talentweb-newsletter/, and the completion of the bylaws of the organisation. 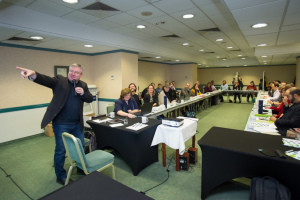 After the lunch break, Lukáš Kyzlík and Ármin Fábián reported on events at the Youth Platform gathering the youth of the Network; then Dr. Colm O’Reilly reviewed the EGIFT project and Orla Dunne outlined preparations for the 2018 ECHA Conference. Antonios Apostolou supplemented the presentation by Prof. Albert Ziegler by a description of the Network’s Talentweb Newsletter: https://etsn.eu/talentweb-newsletter/.